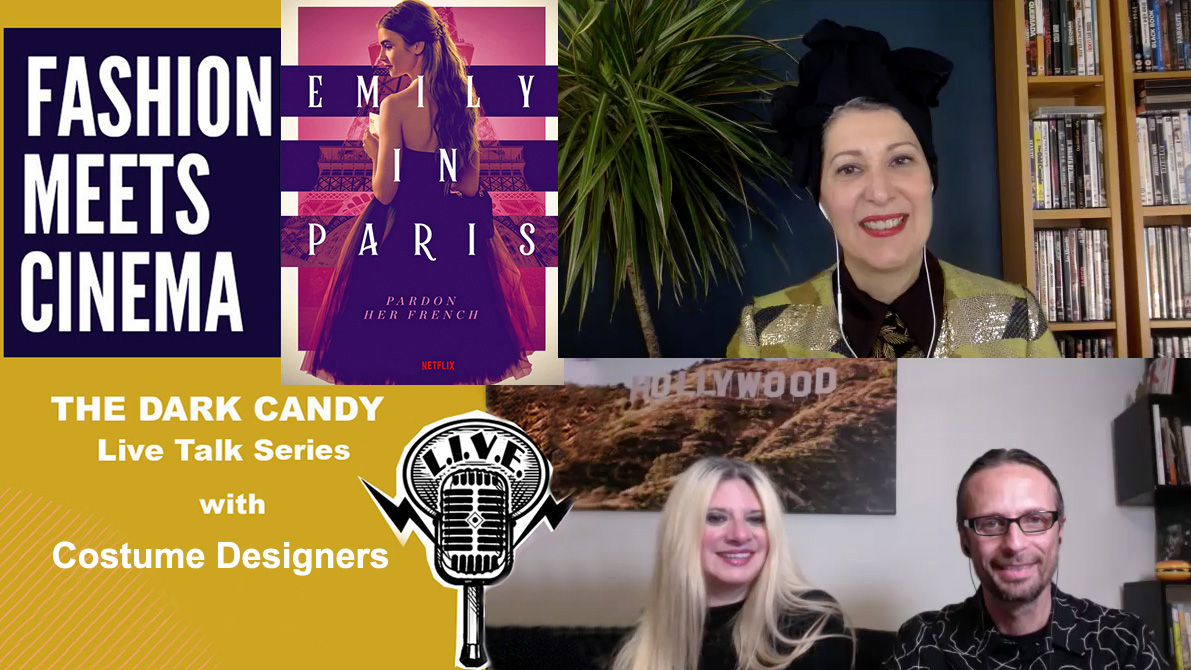 #FashionMeetsCinema, The Dark Candy’s new online project aims to bring together Hollywood Costume Designers with the fashion industry to exchange ideas, find new ways to collaborate and make known the impact costume design has on fashion.

We do this through a series of online Zoom Live Talks where we host big Hollywood Costume Designers and a select number of fashion insiders, that will have the opportunity to ask questions to the guest at the end of the Talk, moderated by Sakis Lalas and Valentina De Giorgi, the Founders of TheDarkCandy.

“The Marvelous Mrs. Maisel” Season 4 is about to get real. Costume designer Donna Zakowska, guest of this new episode of The Dark Candy #FashionMeetsCinema Live Talk Series, confirmed it to us live from New York’s Steiner Studios, where they are filming the new episodes of this Amazon series that has become a cult.

In the new episode of The Dark Candy Live Talk Series #FashionMeetsCinema we hosted the costume designer Natalie Bronfman, nominated to the Emmy Awards 2020 for the costumes of the TV series “The Handmaid’s Tale” (Hulu).

When we talk about the Power of Costume Design it cannot fail to immediately come to mind The Handmaid’s Tale’s costumes: the Red Cape and the White Wings has become the official uniform of the women’s rights movement all over the world, from Argentina, to Europe, to US.

Not to mention the impact on fashion: the SS 2018 collections of Vera Wang, Phoebe Philo (Celine), Emilia Wickstead, Kenzo, Valentino (just to name few) were the triumph of the Handmaid’s Tale’s style.

From his home in Toronto, Natalie told us about roles and colors in Gileal’s society, about veils and masks, about how difficult it is not to offend religions, so it is better to offend them all a little bit, about the challenge in creating costumes for the huge scenes at the Lincoln Memorial and the Gala (especially since Washington was about to be shut down the day they were supposed to shoot) and about the pride of being part of that red and white sea that has become the symbol of women’s protest.

We kicked off the new season of #FashionMeetsCinema Live Talk Series with costume designer Justine Seymour, Emmy nominated for the Costumes of “Unorthodox”, the Netflix TV series that has collected 8 nominations to Emmy Awards, taking home the one for Outstanding Directing for a Limited Series.

“Unorthodox”’s costumes, designed by Justine Seymour, are just amazing. The great story of tiny Esty who fights and wins her right to live free from rules and restrictions, inspired us all. And clothing shapes Esty’s story from beginning to end.

We reached out Justine in Berlin the day before a red eye flight for Los Angeles, where she’ll be back on the set of the new Apple+ TV series, “The Mosquito Coast”.

She told us about her physical and cultural journey into the Orthodox Jewish communities and the need to send somebody “less conspicuous” than her to buy in Satmar community, about scarves Ferragamo purchased and scarves Hermes she dreamed of, about how to make a stunning wedding dress six sizes smaller and how, between vintage and picknweight shopping, you can find a lovely Chloe little jacket… for 12 euros.

In short, she told us all that is behind these amazing costumes that inspired the SS 2020 fashion collections: N°21, Fabiana Filippi, Arthur Arbesser, Rejina Pyo, Christopher Kane are just some of the brands that have brought on the catwalks Esty’s modesty style, made of micro flower prints and calf skirts.

A huge thank you for the support goes to the costume house THEATERKUNST in Berlin, a real temple of costumes (https://en.theaterkunst.de/): established in 1907, it has worked for the most important productions in the history of cinema and TV, from Fritz Lang’s “Metropolis”, to “Ben Hur”, from “Gran Budapest Hotel” to “Hunger Games” and “Unorthodox”.

TheaterKunst has branches in Cologne, Warsaw and Budapest and an archive of over 10 million pieces (https://showroom.theaterkunst.de/).

The guest of our second #FashionMeetsCinema Live Talk is costume designer Mona May, without whom 90es fashion would not exist.

We have costume designer Mona May to thank for teaching us who and what “an Alaïa” was and that the first date with the boy of our dreams requires a Calvin Klein micro-slipdress. We have to thank her for inspiring fashion – from Karl Lagerfeld in the 90es to Versace today – with a sunny yellow plaid skirt suit.

And again, we have to thank her if Clueless became the 90s fashion manifesto, a hit that’s turning 25 this year on July 19th.

And which we celebrated with her and with our second Live Talk attendees, with cake and candles…

But Mona May created more than one “fashion moment” in her career: she designed the costumes for movies like Romy & Michelle’s High School Reunion, Never Been Kissed and for TV series Santa Clarita Diet.

And it is always Mona May that turned Amy Adams into a princess strolling in Manhattan in Enchanted and managed to make cool even a chubby mice with his tail always between his feet in Stuart Little 2.

Mona May has the skill to translate fashion into unforgettable costumes and characters, creating trends that, in turn, are source of inspiration for fashion. For this reason her assistants coined the term “Mona-fied”.

We kicked off #FashionMeetsCinema live talks with Denise Wingate, costume designer who works in movies and tv series.

Her latest work, Unhinged with Russel Crowe, is set to hit the theaters next month.