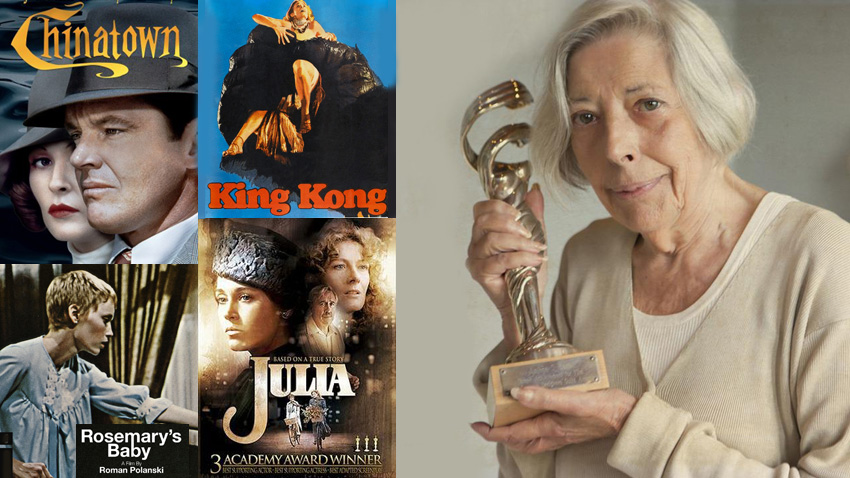 “When the Ant does your clothes you don’t have to act this much!”

The feature documentary dedicated to ”Anthea Sylbert & the New Hollywood era” is currently at the development stage. The Dark Candy Production has already secured access to all the subjects involved and are now looking for funding.

In 2005 director Mike Nichols presented Anthea Sylbert (Giannakouros) with the Costume Designers Guild Lifetime Achievement Award. In his remarks he said “The hardest thing to find in Hollywood is the truth. Anthea would always tell you the truth, even if you didn’t want to hear it.”

It is not easy to describe Anthea Sylbert in words, or to pigeonhole her outstanding Hollywood career into one or more categories.

She’s a piece of Hollywood history, for which she has written significant pages.

Jack Nicholson, who gave Anthea the nickname “The Ant” (she was a petite brunette beauty) and who worked with her on Chinatown, said: “When the Ant does your clothes you don’t have to act this much!”.

Anthea Sylbert is a protagonist of the “New Hollywood” era.

Her entrée into film as costume designer came in 1967, through her first husband, Paul Sylbert, an established production designer and director.

The Sylbert socialized with a group of New York theater and film directors, as well as a number of Hollywood icons, whose work would become synonymous with the post-studio system world. Warren Beatty, Jack Nicholson, Mike Nichols used to go to parties at the Chateaux Marmont, where Roman Polanski and his girlfriend, Sharon Tate, Paul Sylbert and Anthea, all had suites.

They all described themselves as Hollywood “outsiders”, even though they were working on what are now recognized as most of the significant films in the history of cinema.

Anthea is a strong and power woman.

It was not a surprise to many in the industry when she was offered and accepted a job as Vice President of Productions at Warner Bros.

Although Warren Beatty didn’t speak to her for six months because he thought she was a traitor as she entered the studio system. He finally saw the wisdom of her decision and forgave her: one of Anthea’s strengths, indeed, was her ability to resolve conflicts between filmmakers and the studio, whose adversarial relationship had developed in the New Hollywood era.

A few years later she moved at United Artists as Executive Vice President.

But, unable to compromise with the male dominated Hollywood, Anthea left the studio and paired up with another strong and power woman, actress Goldie Hawn, whom she met when she produced the highly successful film Private Benjamin (1980). They created the Hawn/Sylbert Movie Productions Company.

After ten years and ten movies (as Protocol and Something to Talk About), Anthea and Goldie disbanded the partnership and have remained the closest of friends.

Anthea Sylbert is the protagonist of a beautiful coming of old age story.

She firmly believes that if life is structured like a movie into three acts, the third act, which is the shortest in a screenplay and in life, is to finally live to please yourself.

So, together with her husband actor Richard Romanus, the unforgettable Mike in Martin Scorsese’s ”Mean Streets”, they packed up thirty years of living, sold their house in Los Angeles, and moved to a small Greek island in the Aegean where they live happily ever after.

In this documentary we will find out who Anthea Sylbert really is through the amazing stories told by her and by those who knows her well like Deborah Nadoolman Landis, John Landis’ wife and Oscar nominated costume designer; like actress Goldie Hawn, her best friend and her former business partner.

But especially through the stories told by her husband, actor Richard Romanus, with whom she shares the “Third Act” of her life in the Greek island where she chose to live.

In the background Skiathos, the island of Mamma Mia, with her stunning and colorful beauty: the deep blue of the Aegean sea, the green of the mountains, the lilac of the bougainvillea, the white of the houses and the gold of the beaches.